Home » Anions Improve Health
How Do Anions in Negative Ion Clothing Improve Health?
Anions or Negative Ion Clothing can help improve a person’s health and well-being. Scientists have done much research on how Anions have a positive effect on human bodies.
Nefful’s NEORON clothing and bedding lines actually improve the health of users through the use of negative ion technology, a well-researched, well documented, completely natural process. Ions are all around us. They’re electrically charged atoms, carrying either a positive or negative charge. Negative ions, found abundantly in pine forests and near oceans are required to sustain life. When humans lack access to negative ions, body chemistry changes – changes that lead to bouts of depression, physical fatique and anxiety. In his research report called The Power of Negative Ion Science, Clifton Joleey, PhD. states, “It is the negative ions that bring us health benefits, creating a sustained ‘feel-good factor’ as they increase our oxygen, raise levels of alertness and increase concentration.”

Air contains oxygen, hydrogen and nitrogen. Oxygen is what humans need for breathing but it must be the right amount.  Oxygen has healing properties. Under normal circumstances, anions are good for you which explains why companies are researching and designing products that can release anions into the air or absorbed into the skin of users to improve health and well. Anions have been found to improve health and speed up the healing process-being.

If anions could be increased to 100,000 per cc of air, the human body could heal rapidly at a much faster rate. However, this amount of anions released into the atmosphere is only found near forests and waterfall areas.

Nefful International since 1973, through innovative engineering technology has successfully developed a fabric fiber that can generate negative ions when rubbed against the skin.

The chart below explains what is an Anion and the Anion quantities per cc of air found in different places and what the human body needs to stay healthy. 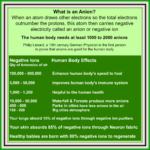 Nefful has produced fabric fibers called Teviron which over the last 40 years have been producing negative ion clothing. Since then, they have developed the Neoron fabric fiber. The fiber releases negative ions through fabric skin contact when rubbed against the body.

Nefful also produces a very good level of negative ions through their range of Negative Ion Bedding with 100% Neoron fabric in Bed Sheets where a Double-Size bed sheet is large enough as a light blanket, for two sleeping on a King Size Bed.

So while you sleep, your body is absorbing high levels of negative ions through your skin into your blood system to fight free radicals. Free radicals attack our bodies by oxidising our body’s cells to cause cancer.

Main Benefits of Anions or Negative Ions on the Human Body

Healthy babies are born with 80% negative ions in their bodies and that is why they are rapidly regenerating and growing. As the bodies age, the levels of negative ions get depleted.

Research has shown when a person dies, their negative ion level drops to a very low level.

Many research documents have proven the positive effects of negative magnetic fields and the benefits of negative ions on our bodies. That is why Nefful founded in Japan since 1973, has been improving health and well-being through their innovative technology in developing the Nefful previous Teviron and current Neoron fabric fiber made into a wonderful range of health garments and is now within the 10 Direct Marketing Companies in the world.

To speak to a Consultant, on the negative ion clothing, Email us